The Manchester Opera House, known simply as just the Opera House, is one of the largest theatres in Manchester, England. The venue plays host to concerts, musicals, ballets and a special Christmas pantomime each year. Listed as a Grade II building, the Opera House has seen its fair share of ups and downs over the years. 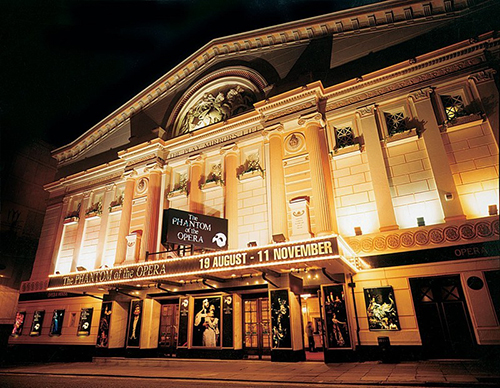 When it first opened its doors, the venue was aptly named New Theatre. The venue celebrated its opening day on Boxing Day in 1912. The venue struggled to compete with other establishments in the area, and was consequently sold to United Theatre Ltd three years after its opening. After being sold, the venue was renamed New Queens Theatre.

Between 1916 and 1920, Sir Thomas Beecham performed on several occasions. In his honour, the theatre was renamed The Opera House in 1920.

Throughout its history, the venue has adapted to the world around it. The Opera House survived the Second World War and even served as a cinema and bingo hall for some time. It wasn’t until 1984 that the venue would once again operate as a theatre. Since this time, the theatre has played host to several famous shows, including Phantom of the Opera, Barnum and Oliver.

In 2003, the venue was refurbished and still continues to attract some of the best in entertainment. The theatre is currently owned by the Ambassador Theatre Group.

The Manchester Opera House features a 15 bay facade and was designed in the Classical style. A relief of a horse-drawn carriage is situated above the central bays. An entrance canopy was added during the 20th century.

The opera house features a seating capacity of 1,920. Two cantilevered, curved balconies inside of the auditorium hold 500 seats each. The spacious stage and orchestra pit makes the theatre a great venue for musicals and orchestral performances. The theatre’s stage is 37 feet wide and 42 feet deep, and the orchestra pit can hold up to 80 musicians. Although the theatre was redecorated in March of 2011, the green and gold colour scheme inside of the auditorium was preserved.

Inside of the theatre, patrons will find bars on all levels of the venue. Hospitality packages are also available to make the evening a little more special. A cloakroom is situated in the foyer for the convenience of theatre-goers.

The Opera House box office is only open on performance days two hours before the performance begins and closes at 7:45PM. If you do not wish to purchase your tickets ahead of time online, you only have a small window of opportunity to snag seats for your show of choice.

The opera house features an infra-red sound enhancement system for patrons with hearing impairments. Access to the sound system can be provided via headset, which is available in the cloak room for a £10.00, returnable deposit. Hearing and guide dogs are permitted in the theatre.

The Manchester Opera House is available for one-off hires, events and conferences. From children’s parties to corporate events and all-inclusive theatre evenings, the opera house is a fantastic place to host your next event.

Throughout its lifetime, the Manchester Opera House has played host to several well-known productions.

The opera house also hosted two other premieres which include the Take That musical Never Forget and Ghost the Musical. The former show ran from March through May of 2011 before transferring to London’s West End.

Getting to the Theatre

There are two car parks near the theater: Great Northern and Spinningfields (located on New Quay Street). Parking fees are £7.00 for 6 hours. Any time over this 6 hour limit will be charged at the normal rate.

The Manchester Opera House continues to attract the best in entertainment and is an excellent way to spend an evening. Tickets can be conveniently booked online with theatre card and group booking discounts available.

You can find the address here, get contact details here and take a look at the seating plan here.

This website uses cookies to improve your experience while you navigate through the website. Out of these cookies, the cookies that are categorized as necessary are stored on your browser as they are essential for the working of basic functionalities of the website. We also use third-party cookies that help us analyze and understand how you use this website. These cookies will be stored in your browser only with your consent. You also have the option to opt-out of these cookies. But opting out of some of these cookies may have an effect on your browsing experience.
Necessary Always Enabled
Necessary cookies are absolutely essential for the website to function properly. This category only includes cookies that ensures basic functionalities and security features of the website. These cookies do not store any personal information.
Non-necessary
Any cookies that may not be particularly necessary for the website to function and is used specifically to collect user personal data via analytics, ads, other embedded contents are termed as non-necessary cookies.
SAVE & ACCEPT